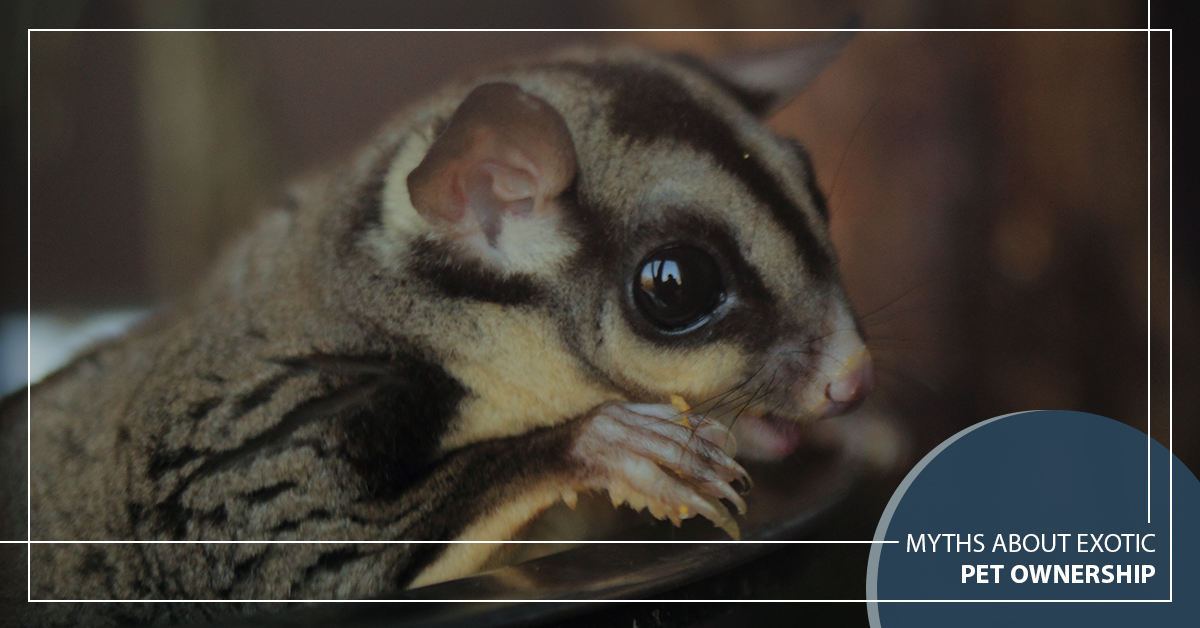 At 2nd Street Animal Hospital, we have the unique distinction of being an exotic pet vet clinic. While we do take “normal” pets such as cats and dogs, we also have licensed professionals who are qualified to work on exotic pets. Whether you have a chameleon, a bird, a snake, or some kind of unorthodox mammal, we can tend to their needs and help them to be happier and healthier with our treatments.

Unfortunately, when it comes to exotic pets, there are a lot of falsehoods that are thrown around, often with the intent of demonizing the pet owners. In fact, many things that are said about exotic pet ownership simply aren’t true, and in this blog post, we’ll explore some of the most common myths regarding the subject.

You don’t need to look far to find exhaustive research that shows how animals are different when they’re reared by humans. While there are certain species that are more domesticated than others (such as cats and dogs), the biggest factor of an animal being “wild” or not is their upbringing. If an animal has been raised in the company of humans their whole life, you can bet they’ll act a lot different than a truly wild animal who hasn’t.

“Christian the Lion” is a famous story that embodies this idea — in short, Christian was a lion that was raised among humans in London. Eventually, he grew too big to be cared for and was released into a wildlife reserve. Christian’s original owners visited him a year later, being warned by experts that there was a high chance he wouldn’t remember them, which would make them lion food.

When Christian saw his original owners, he sprinted toward them with the speed and ferocity of a lion on a mission — only to embrace them in a playful hug, nuzzling their faces as he stood on two feet. The couple returned two years later and were greeted with the same outcome.

The point is that this lion, an animal who is considered by most to be the definition of wild and untamed, had significantly different behavior than a wild lion because of his human upbringing. The same can be said for most exotic pets!

This one is a half-myth. In reality, it’s kind of pointless to have any kind of blanket statement about exotic pets, because there is a staggering variety of different species. Pretty much anything that doesn’t fall into the normal categories of dog, cat, rabbit, etc, can be considered exotic, making it an exercise in futility to say almost anything that applies to all exotic animals as a whole.

The truth is that many exotic animals are banned, but it varies from state by state. Your best bet is to find out what pets are legal in your state, which can easily be found out through an online search. In Pennsylvania, there are many banned animals, such as primates (of any variety), wild animals (from porcupines to common cottontail rabbits), wolves, and various types of snake and bird. However, that still leaves a lot on the table!

Myth: You Need to Have a Permit to Care For an Exotic Animal

Like the point above, this is a half-truth. There are, in fact, animals that require a permit and/or various special skills for legal ownership. Coyotes are an example. In these instances, the ownership of the animal isn’t so much for owning a pet as it is keeping them in a controlled environment, such as a zoo.

Again, searching your local laws is a great way to get the skinny on what pets you can or can’t own. You might be surprised to find what kind of unique animals you can own without any kind of permit!

This is another example where it’s so pointless to have a universal statement that it may as well be a myth. Saying exotic pets are dangerous is like saying that swimming is dangerous. In most situations, you’re completely safe, but in extreme scenarios, swimming could easily be the death of you.

With exotic pets, there are so many that it’s disingenuous to say that they’re all dangerous. We would argue that the majority of exotic pets aren’t dangerous at all, but, of course, there are extreme cases that are the exception to the rule.

Make Sure Your Exotic Pet is Happy and Healthy

If you’re an exotic pet owner, you’re probably just as tired as we are of these myths. If you want to come to a place where you can connect with people who sympathize with your unique pet ownership, stop by 2nd Street Animal Hospital today! Serving the people of Philadelphia, we are trained to handle just about any pet under the sun. Contact us to get started!